Despite his fame and his love of conventions and parties, Karl was, in essence, quite a private person. Even those who knew him best had only the hint of the philosophies and passions that drove him. But here, and on the Channeling page, we will piece together as much of his history as we are able. 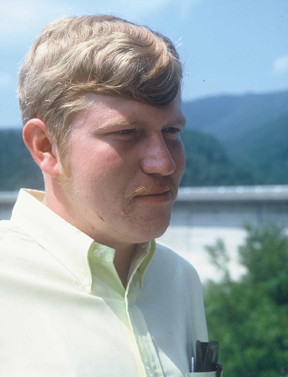 Cedar Lane ~    Most of Karl's youth was spent in this comfortable but unassuming house on Cedar Lane. It is the house of which he writes in the story of the same name. Here he acquired the interests and developed the skills and talents that formed the author he was to become. In the dormer to the right was his bed and the bookshelves that held the pulps and out of print volumes of horror and fantasy that inspired him. Along the edges of the shelves were 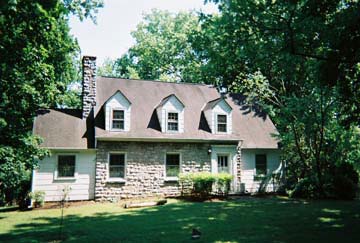 eldritch knick-knacks: animal skulls he'd found and cleaned, arrowheads he'd found on Iron Hill, now an island thanks to the work of his father and his organizaton, scarabs and other bits of occult artifacts, and a werewolf model I'd painstakingly assembled and painted and given him for Christmas. (On a visit I was telling him of the great pains I'd gone to to get the blood dripping from his hand to adhere and, pointing at it, broke it clean off.) On one wall was a collage he'd done himself of a woman trying to escape from the horrors of a child's drawing. And it was at that Window that Karl, in a dream, came upon a lean, red-headed, craggy-featured man staring out at Cedar Lane; when the intruder turned to him Karl thought his features almost familiar. "I would think you would know me," the man told him, "I'm Abel." 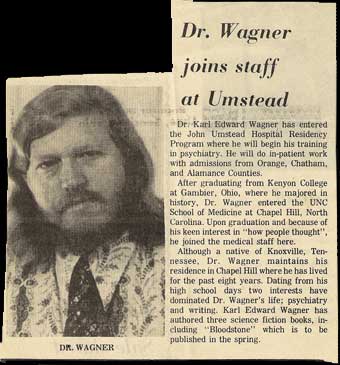 Med School ~    Karl graduated from Kenyon College in Gambier, Ohio, with a degree in history, a field of study that probably helped him much more than any pre-med courses would have in what was to be his true career. When he was accepted into UNC Medical School he had the highest IQ of any applicant up to that time. I've written a bit more about Karl's time in med school in my article, "The Dark Muse of Karl Edward Wagner," which can be found linked to the home page or by searching for Coury Turczyn's Pop Culture site. I've had little luck locating any of Karl's UNC classmates, but I'm sure they'll have some tales to tell, if I ever run them to ground.

As his well known, his disillusionment with the medical profession and with psychiatry in particular began while still in school, compounded by his year out of school after being held back for an act of conscience despite stellar grades, and reached fruition in practice. He was a great opponent of schock treatments (more politely known today as ECT), whereas his hospital eagerly encouraged the lucrative procedure. When he learned he was being transferred to the women's ward, where ECT is much more emphasized, he resigned and never practiced again.

Forebears ~    Maybe there's something to this genetics stuff; Wagner's family seems to have more than its share of particularly interesting members.

Richard Wagner ~    Best known of all the Wagners, no doubt, is Uncle Dick. The Wikipedia entry on Karl says he "claimed, not entirely seriously, to be related to 'an opera composer named Richard.' " On SciFiReader.com reviewer Jack Crane observes, "Interestingly enough, Wagner’s mythos is heavily steeped in what one might call Germanic myth and there is a distinct 'Wagnerian' temperament (here meaning the composer, Richard Wagner) to both his thematic coloring and his 'larger than life' protagonist." Why the Wikipedia author thought Karl was not entirely serious I don't know, but Karl mentioned to me more than once that he was a nephew at a certain remove of the great German composer. I had been informed that the reference Contemporary Authors specified the relationship, but that turns out to be only a quote of Wagner’s statement in his final interview (see homepage) with B.L. Sinor for Horror: “My great-great-great uncle was an opera composer named Richard.” Not quite the final word; Karl might have been joking or mistaken; his sister and nephews are uncertain about whether Richard was related. So I must affirm a definite maybe.

I'm not aware that Karl was an opera buff, nor that Richard had any direct influence on Karl's writing. But he certainly had a general knowledge of the man and his themes. I know he was aware of the Wagner protagonist of The Flying Dutchman, cursed to wander the earth through eternity. In some versions of the story it is the ship that bears the name Flying Dutchman and its Captain, van der Decker, has been cursed for defying God. Only the love of a woman can save him. Somehow, it's not hard to see Karl, whom many of his friends, including Manly Wellman, called Dutch, standing at the prow of his ship, his long red hair streaming from underneath his tri-cornered hat in the sea spray, longing for port and the love that has eluded him. The art in the Fantasy heading reflects Karl's connection with his great-uncle, whether that relationship was real or fantasy.

Red  ~   Karl passed his own red hair color on to his creation Kane. He, in turn, inherited his sanguine locks from his father, Aubrey "Red" Wagner. Red was left fatherless at the age of seven and, like Kane, worked at farming until forced to leave the garden to gain the means to acquire the knowledge he would need to succeed in the wide world. Red got a degree in engineering and, shortly after graduation, was requested by President Roosevelt to journey south to take part in the great TVA experiment. He started at the bottom; there is an old photo of Red planting saplings as part of TVA's reforestation mission; bad farming techniques and industrial pollution had left erosion so bad in some parts of the Tennessee Valley that the land might well have been cursed. The barren Copper Hill region could

be seen from space. In 1962 President Kennedy appointed Red Chairman of TVA; he held the post longer than anyone else. TVA brought flooding in the Valley under control, the Tennessee Riveer was made more navigable, malaria was suppressed, fertilizer plants were built to renew the soil, dams brought electricity to a dark region and forests were, indeed, restored, much of that under Red's direction. He also dammed the Little T and began TVA's nuclear program. Wagner was a great admirer of his father and was devastated when he died of Parkinson's disease in 1990, just four years before Karl himself.